My mind drifts to PràCatinat on the best of days, but in lockdown even more so. Oh to be on a Val Chisone hillside with Turin shrouded in the distance: wild strawberries and safflower skippers, pellucid springs and the clang of a wandering flock; chamber music floating up from Sala Rostropovich.
New York was a far cry from Piedmont on March 12th but Milo—Xenia student and my Godson—was at my side, skateboarding along Brooklyn Bridge Park’s myriad piers. It was one of those Big Apple days—the cyan expanse somehow more distant, sunlight skipping off skyscraping façades. Somewhere north of the Empire State lay Carnegie in wait.
“Carnegie Hall debut on Friday 13th, eh? That spells trouble, Godfather!”

I’d been hearing that superstitious drivel since the concert date was announced, but there we were, a stone’s throw from Manhattan and only 24 hours until showtime. Then the unimaginable:
“Daniel…”—it was our American agent FaceTiming from Boston—“…the concert’s off.”
The Castalian Quartet was the first of the Carnegie Covid Cancellations. 24 hours to go until nothing; a rapid decrescendo. As Trump banished me back to Britain, I bid adieu to Milo and escaped to my parents’ cottage in Giggleswick, where no one had laughed in a while. “Why aren’t you practising, son?” As the balconies of Bologna and driveways of Bayswater came together in music, I couldn’t even look at the violin. What was the point? No concerts for months. “How do you get to Carnegie Hall? Wait for a pandemic to be over.” A string quartet silenced, a perpetual performance of Four Thirty-three.
After a couple of weeks I came round and took my fiddle out of its case. Had it seen anything like this in its three hundred years? I couldn’t remember the last time I’d taken a fortnight off playing. The sound was awful, deafening in my ear. And yet I loved it, as if I were casting my senses upon this violin, this ligneous treasure, for the first time. What secrets lie behind your blemishes? Why is your back emblazoned so, striped with cinnamon like a Caspian Tiger? Has your varnish, burnished and bleeding, always smelled so sweet? It took me back to the pine-clad attic of my childhood home, where my train set ran in its figure of eight. I was a kid again. Playing.
Everything felt so relaxed—bowing arm supple, vibrato languorous. I know of some who are learning the concertos they never got round to; others overlay tracks to duet with themselves. Perhaps I should be doing those things, but I’ve regressed—I’m back to basics. Without a performance on the horizon, I’m remembering what it was like to play without the need to deliver: I’m laughing at erroneous squeaks that would’ve driven me crazy pre-lockdown; I’m marvelling when I cajole a half-decent noise from a priceless instrument; I’m hearing it all afresh, I’m taking my time. I mustn’t forget to do that when things get going again.
So here I am in Yorkshire, a solo second violinist fretting over the next supermarket order and how to work Zoom. There’s a shire horse up the road and alpacas too. A Highland cow peers out from behind his unkempt fringe as I do the same. I never knew there were so many varieties of sheep: ones with curly mops, some jet-black, lambs gambolling, others roly-poly-ing. When we hop the stile, their mothers lollop away while they cock their heads quizzically—want to come and play? The garden chimes to bluebells and white bells and the clunk of club on ball—Dad’s nine-hole putting green, a Covid course of curses and frustration and occasional holes-in-one. Trees and bushes too, of types I never bothered to learn, fragrant and quivering with finches and dunnocks. In concert season I don’t stop to notice these things; I mustn’t forget to do that when things get going again.
One day Milo and I will ascend those dizzying U-bends back up to PràCatinat and make music together. We’ll take our time: we’ll stop to take a look and we’ll not miss a thing; we’ll eat Alpine berries and drink from the gurgling spring; we’ll play. If we promise to do that, will you promise to be there too? You’ll find us outside Sala Rostropovich, looking for lambs.

HOW DID BEETHOVEN HEAR?

Have you ever tried listening to a video performance of a piece of music with the sound turned off? What do you hear simply by watching it? If a string quartet was playing, through observing the gestures, the movements of the bow and the left hand of the instrumentalist one can get a certain idea of the result simply by translating the seen into the heard. However, can you tell what kind of sound is being made? Can you tell the tempo and dynamics? Can you tell the character and direction of the phrase? Why not try?

During lockdown, when many of us have been giving –or receiving- lessons on Zoom or Skype, we have had to rely on our eyes a lot because of the bad sound quality of the audio. In this situation I believe one’s auditory sensations are heightened at least 50% through close observation of how the bow is used.
It ‘s always a valuable exercise to follow a score in silence and imagine not only the pitches and rhythms but the character and physical sound of the music. Doing it through following a soundless video can be equally useful. 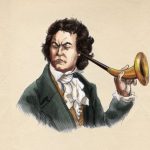 So what about Beethoven? As we know by the end of his life he was almost totally deaf. In March 1825 Beethoven’s new quartet Op 127 received its first performance, but as he knew he wouldn’t be able to hear it, the composer didn’t bother to go to the concert. His nephew and brother reported back that the première performed by Ignaz Schuppanzigh’s quartet was a failure. A fuming Beethoven decided to have Schuppanzigh replaced as first violin for the second performance. The young Hungarian violinist Joseph Böhm was to lead the new quartet. He was duly warned: “I will come to ALL the rehearsals,” –something which made his quartet very nervous.

Böhm wrote about the experience later in life:
“Rehearsing in Beethoven’s presence was not easy. His eyes followed the bows with the closest attention, <…> so he could judge the smallest fluctuations of tempo or rhythm and correct them immediately. Towards the end of the last movement, a meno vivace was marked, which seemed to me to weaken the general effect. At the rehearsal therefore I advised the other players to maintain the original tempo, which was done to the betterment of effect. Beethoven, crouched in a corner heard nothing, but strained to watch with utmost attention. After the last strokes of the bow, he said laconically, “Let it remain so.” And went over to the player’s stands and crossed out the meno vivace in all four parts.”

We continue with our theme of “favourite Haydn Quartets!” with a contribution from Eilìs Cranitch, founding member and President of the Xenia Chamber Music Course.

It is well-known that Haydn often made musical jokes, either hidden within the composition’s structure or real jokes such as his Farewell Symphony where at the end the musicians quietly leave one at a time, leaving only one violinist on stage to close the symphony. For this reason it is hardly surprising that one of Haydn’s quartets bears the nickname “The Joke.” However, what is surprising is just how much mischief the composer gets up to, particularly in the last movement where he plays a trick on us with no less than three false endings. In fact there are hidden jokes in each of the movements .

In the first movement the second subject hardly exists in as far as it is a variant of the first theme, recomposed in fragments mixed up and newly presented. It is the more singular since Haydn nevertheless respects the movement’s sonata form.

The second movement Haydn deliberately decides on an innovative feature, replacing throughout the Op 33 set of quartets the more courtly Minuet and Trio by the faster Scherzo, maintaining of course the ¾ time signature. In some of the Op 33 quartets the Scherzo appears as 2nd movement, at other times as the 3rd– another of Haydn’s jokes? This particular Scherzo sees the 1st violin playing an Austrian dance, the humorous shoe-slapping Schuhplattler, which is formed of a 10 bar phrase rather than the usual 8 bars. Haydn deliberately inserts an extra two bars in the middle as an interruption of the dance. In the Trio the first violin is given lurching glissandi joining one note to another, creating the effect of a drunken hiccup, or an imitation of a badly trained fiddler! Haydn most surely intended to provoke laughter with these effects!

The third movement seems not to present surprises but wait a minute and listen! The cantabile theme is presented by the viola and cello, not by the first violin! This is already something of a joke! Not only that, but further on in the movement the first violin is found playing an accompaniment to the duet of second violin and viola— the poor first violin! But no worries, the first fiddle will get a chance to shine in the finale, when in a fast presto tempo it guides the joke, rather the jokes for deceptive false endings! Not surprising that this quartet subsequently got the nickname “The Joke”.  Have a great and enjoyable listen!